This article was originally published in Kerygma June 2008 | An interview By Bo Sanchez.
International Marketing Group’s mission to spread literary is most visible via the numerous FREE financial literacy seminars in Makati and major cities in the Philippines.

We met at a most unlikely place – inside an airplane. I was bumped up to business class and he was seated right beside me. Since then, Jose Enrique (Joen) de las Peñas became my mentor in investing. 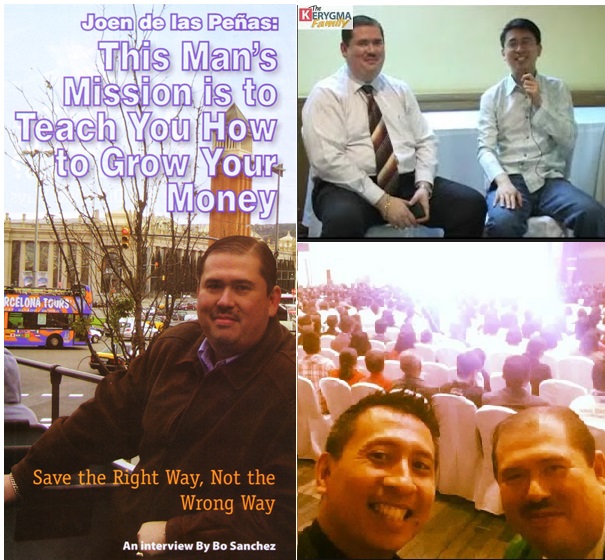 Bo Sanchez interviews Joen de las Peñas, whose mission is to grow your money. Save the right way, not the wrong way.

Joen has a mission: to change the adage that “the rich get richer and the poor get poorer.” He believes that “the average person, even the poor, has an equal chance to become wealthy if given the right information.”

Joen certainly knows what he’s talking about. He is a registered financial planner and has more than 12 years of financial management experience. He sits as the president and chairman of the board of International Marketing Group (IMG) Insurance Brokers Corporation.

Joen is certainly one guy I learn so much from every time I talk to him.

Bo: I still remember your dialogue. You said, “I like your book.” I think you read Simplify and Create Abundance. And then you said, “Can I share some more to you?” In other words, you were trying to say, “You still lack some knowledge.” But I truly appreciate all the financial knowledge that you have shared with me all these years.

Joen: That’s true. I read a lot of your books. It’s always been my dream to meet you so I could tell you a bit more about financial services, about the mission that we do. I know that you can help spread what we know, so it was a good chance to let you know all the things that we know.

Bo: Can you share with us this mission, this crusade in your heart that’s been driving you for the past 10 years?

Joen: It’s about the statement “the rich get richer and the poor get poorer.” Our mission is to change that. The rich get richer, it’s good. But the average person also has the right to become wealthy and I know that with the right information, he will have the same opportunity as the wealthy people.

Bo: That’s wonderful. So the rich, yeah, they can get richer, so long as they share their riches. But you’re saying now that the average person can become rich as well.

Bo: Can you give some specifics?

Bo: You know, just yesterday I went to my bank and they gave me this leaflet on new interest rate. I was so shocked – it was 0.75% for a year! I thought it was at least 1%.

Joen: And that’s still gross. You still have to deduct 20% withholding tax. What a lot of people do not understand is this: that the bank is a good vehicle for business; but for your own personal savings, there are lots of other financial vehicles that you can use.

Most people think that by saving they’re already doing something right. But the fact is, you couldsave the right way and save the wrong way. And saving the wrong way, at the end of the day, will not change anything.

Bo: That’s a very important point. You know, Joen, my role is to give people the capacity to have a vision. I give them the capacity to dream. I remove their limiting beliefs – that I can’t do it, that I’m poor. So you’re absolutely right. People don’t have a vision of doubling their money.

Joen: A lot of people are like that – they do not understand that with a meager rate of return on their savings, they will never have a chance to become wealthy. But I can show you a way that, even if you save P20,000 for six years with a total of P120,000, over the years as it compounds, it can be P9.5 million.

Bo: Wow. So you’re saying, Joen, that if the average Filipino can save P1000 or P2000 a month, they can become a millionaire over time? But they need to know how to save, where to save.

Joen: Yes and at the same time they should have a vision where their money is going and how exactly their money can grow. All of us work hard for the money. But eventually if we know how to handle money, money can actually work for us. We can be the boss of our money and not the other way around.

Bo: OK, you’re saying, don’t put it in a bank, use the bank for business as loans, maybe business loans. But tell us, what vehicles are you talking about that can make one a millionaire over time?

Joen: One of the widely used financial vehicles right now, even is the US and Europe, is the mutual fund. In a mutual fund, your small amount of money becomes part of a very big fund. If that fund earns 12% or higher, whatever savings you have there will have an equal rate of return as the whole fund. Many people think that the mutual fund is for the wealthy. But in fact it was created for the average persons to earn equally with the wealthy people.

I look at a lot of Filipinos and they’re very focused on how to make money but that’s only 50% of the equation. The other 50% is learning how to let their money go back to them much faster.

Bo: That’s true. Is it safe to invest in a mutual fund?

Joen: A mutual fund is regulated by the government and managed by a professional person to let the money grow. It’s one of the safest vehicles to let your money grow and to have the best rate of return. They have what you call asset allocation. The fund is spread correctly and all that the fund manager does is to think how to let the fund grow. And because of regulation, it’s a very safe vehicle.

Bo: I’m sure we could go on and talking about this wonderful topic. One last thing before we end. You said that in the US, 20% of the people there put their long-term savings in the bank, but 70 or 80% put their money in mutual funds already. In the Philippines, it’s the opposite. Not even 1% of our people invest their money in mutual funds. And so you have a long way to go.

Joen: Yes, there are a lot of things to be done. But I believed that with the right information we can actually become like the US and there will be more money in mutual funds compared to the regular savings in the bank.

This article was originally published in Kerygma June 2008 | An interview By Bo Sanchez.
International Marketing Group’s mission to spread literary is most visible via the numerous FREE financial literacy seminars in Makati and major cities in the Philippines.